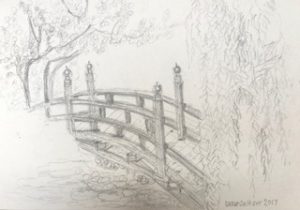 When the dead return

they will come to you in dream

and in waking, will be the bird

a way in, will masquerade

as the wind, its voice made audible

by the tongues of leaves, greedily

lapping, as the waves’ self-made fugue

is a turning and returning, the dead

will not then nor ever again

desert you, their unrest

will be the coat cloaking you,

the farther you journey

from them the more

that distance will maw in you,

when the dead return to demand

everything you have to give and nothing

will quench or unhunger them

as they take all you make as offering.

Then tell you to begin again.

Author’s Note on “No Ruined Stone”

The poem is part of a manuscript that bears the same title, No Ruined Stone, and is an alternate account of history, based on the life of eighteenth-century Scottish poet Robert Burns. The real Burns very nearly migrated to Jamaica to work as a bookkeeper on a slave plantation. In the poems, I follow what happens to the fictional Burns I create, who does go to Jamaica, and to one of his imagined descendants, a mixed-race woman born into slavery and who comes of age as emancipation is happening in the British West Indies. I wrote the poem while in Scotland this past May working on the “Burns” book, and the first draft of the poem was written on the anniversary of my grandmother’s death. After my family’s emigration from Jamaica and my father’s sudden death (a suicide a few days after), which occurred the year I was turning nine, I was raised in Miami in the home and under the primary care of my maternal grandparents. As with many poems I’ve written over the past 20 years, “No Ruined Stone” confronts death, the concept of an afterlife, and how the grieving process extends far beyond what many might believe is the time frame for grief. In thinking about death and my relationship to the dead, I feel kinship with what the poet Lisel Mueller in one of her poems has said: “Memory is the only afterlife I can understand.”

From Jamaica, Shara McCallum is the author of five books of poetry, published in the US & UK, most recently Madwoman, winner of the 2018 OCM Bocas Prize for Caribbean Literature Poetry Prize. She teaches creative writing & literature at Penn State University and lives with her family in Pennsylvania. “No Ruined Stone” appeared in the Poem-a-Day project sponsored by the Academy of American Poets.

Reprinted by permission of the author