Character – Etched In Your Soul

Have you ever wondered how — or if — grief has changed you? It seems like a simple question. At least that’s what I thought when the therapist leading our support group asked us: “How has grief changed you?”

Then I realized that what seemed simple, wasn’t. Because my first thought was, “I haven’t changed.” And almost in a heartbeat, I thought, “I’ve completely changed.” How could I have such contradictory thoughts?

Leaving our group meeting, I dwelled on the question. And my first answer still seemed accurate. Losing my wife didn’t change my character. I use the word “character” in its original sense. The root of character comes from a Greek word that means to engrave — and the actions that you repeat over and over again etch in your soul a way of being that becomes what we call character. It is who you are. As painful as it was to go through the process of losing my wife, I acted throughout that process in a way that I believe was true to my character.

So I haven’t changed, right?

But then I thought about another idea one of the group therapists presented to us. It was the image of two circles. One circle is you. The other is your spouse. And when you marry, the two circles begin to overlap. And the intersection of the circles becomes your shared identity. Over time, the intersection becomes larger, and the singular portion of your circle — though no smaller — is partially hidden.

Then your spouse dies. In short order you realize a large portion of your own identity has also died.

That image of the intersecting circles stuck in my mind. It led me to imagine not two circles, but two rose bushes. I imagined two rose bushes growing side by side, close but not touching. Then, as time passed, the two bushes began to intertwine their branches. Roses bloomed — beautiful red roses that caught your eye — but even if you looked closely, you could hardly tell which rose belonged to which bush. 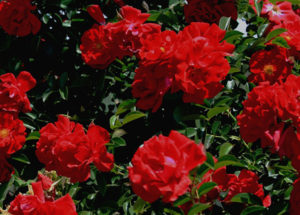 If you have lost your spouse, you have felt the pain of grief cutting your loved one away from you, but you also know that you are the healthy rose bush that remains, that roses will bloom again, even as the memory of being intertwined with the other will always remain.

Which brings me back to the question: How has grief changed you? If I think of myself as the healthy rose bush that remains, again I say, I haven’t changed. My relationship with my wife has changed, but I remain.

And yet… and yet I have an overwhelming sense that I have completely changed. Which leads me to recall a sermon I once heard, one that I now understand. It was based on David’s wonderful words in a Psalm, where he says that — by testing us and laying a burden on us — You (God) have refined us, as silver is refined.

That reference needed an explanation, which was that silver ore is crude and raw, and only in the process of exposure to extreme heat and refinement is its beauty revealed. That, finally, makes some sense to me. Grief is the process of burning away the pettiness from our souls to help us remember the beauty and essence of our loved ones.

In this sense — the larger sense that we are more than our character, that we are even more than the beautiful shared identity we created as a couple — yes, grief has changed me. I only hope that it has changed me for the better, because the cost of grieving has been high.