In the months after a person’s spouse has died, some people feel like nothing is changing, like they’re really not healing. That feeling can be deceptive, because for most people their emotional, mental, spiritual and physical states are changing.

To illustrate the changes, HOPE group members recently wrote down the word or two that best described their current state of mind. The results are represented as “word clouds” below.

The chronology of the changes is important. HOPE Connection’s spousal loss support program is designed to be a two-year program organized by the number of months since a person’s spouse has died. Group 1 is for people whose spouses have recently died. Group 5 is for people nearing two years since their spouses died.

In addition, a group called New Beginnings is for people past two years of grieving.

Group 1: For people whose spouses died within 0-4 months

Note: Group 1 had the most number of words that only one or two people related to (which turns them into smaller words in the cloud). This seems to indicate there is a greater variety of thoughts and emotions at this stage. 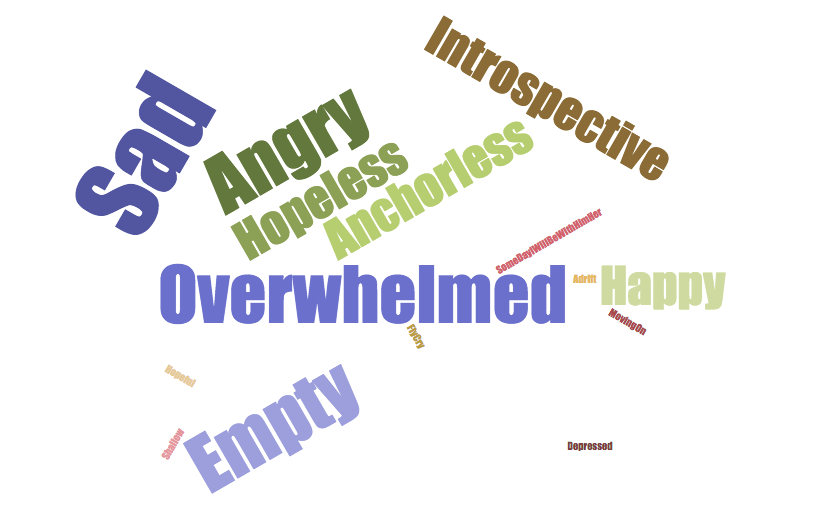 Group 2: For people whose spouses died within 4-8 months

The word in the graphic that is too small to read easily is: 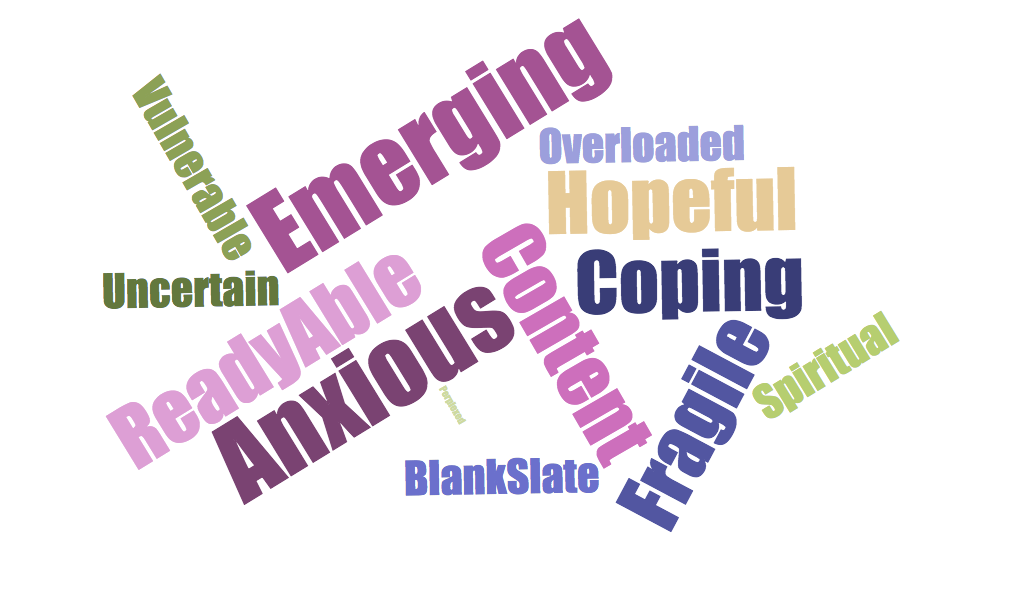 Group 3: For people whose spouses died within 8-13 months 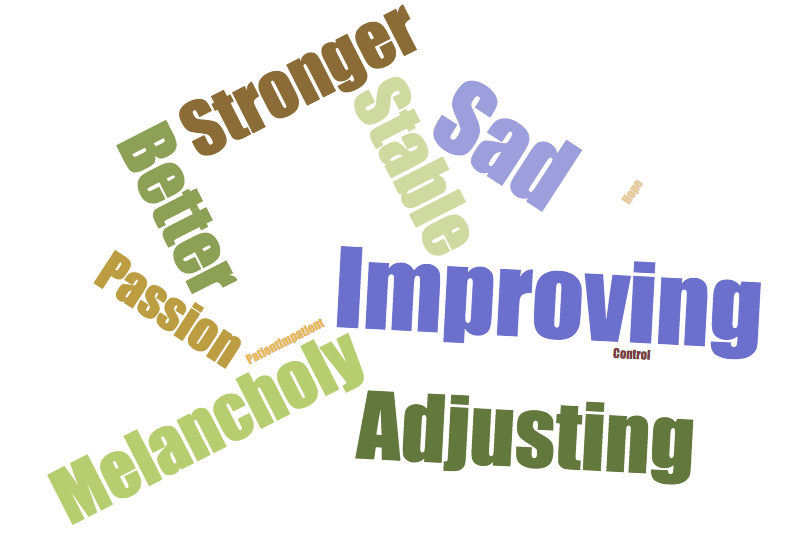 Group 4: For people whose spouses died within 13-18 months

The word in the graphic that is too small to read easily is:

Group 5: For people whose spouses died within 18-24 months 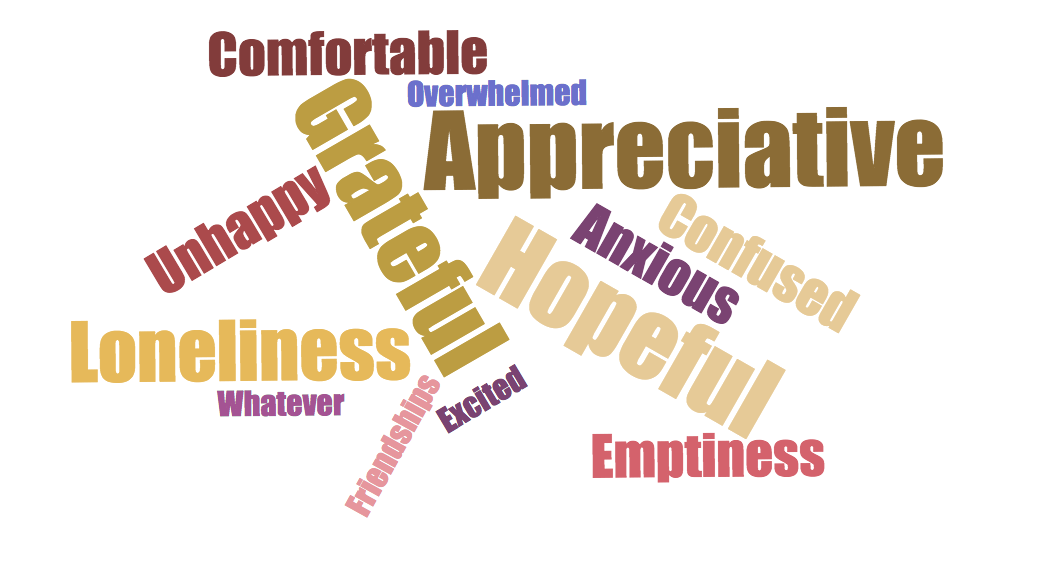 Note: This is the first group in which the word “loneliness” is mentioned. That is fairly striking, because that feeling is often expressed verbally in earlier groups. Apparently, it was not top of mind in the early groups during this exercise.

Mention of loneliness at this stage is an example of the peculiar nature of grieving. Sometimes both the therapists and group members comment that the second year of grieving is worse than the first — and sometimes that comment is challenged. It is difficult — and in the end may be unfair — to measure and compare the intensity of emotion during one time period to another. But this exercise shows that the balance of negative vs. positive emotions certainly changes, and that new emotions arise. So, is the loneliness of a Group 5 member “worse” than the sadness of that same member when they were in Group 1? It’s probably a good question for people to ask themselves as part of the grief process, but this exercise also makes it clear that “healed” is not a state that you magically attain on Day One of the 25th month. 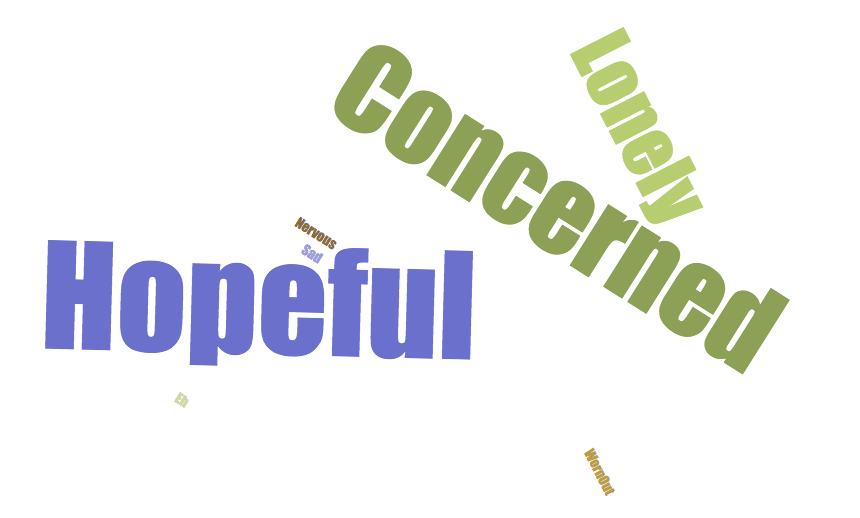 The goal of this exercise was quite simple: to illustrate that, even though healing through grief may be slow, there is progress. With that in mind, members of the early groups may take heart from the members of Group 5 and New Beginnings and look forward to a time when the dominant feelings are “appreciative” and “hopeful.”